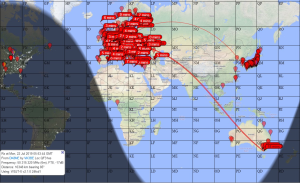 In the Northern Hemisphere, the number of operating stations increases near the summer solstice (June July), but not so much near the winter solstice (December January).

In the Southern Hemisphere, there will be more operational stations in December and January, but not much in July.

In June-July and December-January, If activities increase in both the northern and southern hemispheres, there may be more chances to QSO.

This summer June - July, we have had many opportunities to QSO with VK and ZL from JA.

If the activities of ZS and other African stations go up, there may be QSO possibilities not only for Europe but also for Far East Asia.

The same goes for South American stations. In fact last July I have received HK3W.

As it has always been said, the season for the 6m band is not only a summer. Winter is the second season.

If 6m band enthusiasts around the world raise activities during the summer solstice and winter solstice seasons, we may enjoy some special propagations, I guess.